Deducing the mannequin models in "The Trevi Collection"

Deducing the mannequin models in "The Trevi Collection"

Ever since I saw the episode in my imprinting years, I've always wanted to know who played the three living mannequins in "The Trevi Collection." It's certainly an uphill quest - Darren McGavin is dead, episode director Don Weis is dead, and while Lara Parker and Chuck Waters, the only other actors to appear in scenes with the performers, are still alive, it's unlikely they would remember a dayplayer's name from 40+ years on.

I grabbed some good screenshots though to bolster the hunt.

The model in pink kinda looks like Mary Woronov, though obviously it's not her. But it's the one in red I've got a hunch on.

I had always thought she looked a little like Stockard Channing, but I knew that wasn't likely. But then, while doing other research, I found out about the actress Kathryn Loder, most likely remembered for playing antagonists in THE BIG DOLL HOUSE and FOXY BROWN, and, yes, with features similar to Stockard Channing 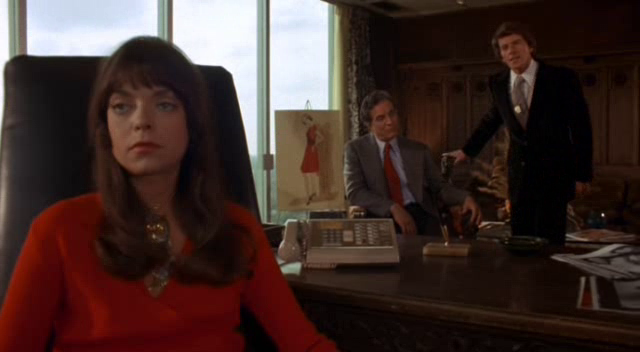 She does not have a very large body of work, sadly because she battled diabetes most of her adult life, and it claimed her in 1978. Now, why would someone who was getting speaking roles in films agree to an uncredited appearance on TV with no dialogue? Well, her only credit in 1975 is a fleeting appearance on "FAR OUT SPACE NUTS" with Bob Denver and Chuck McCann, which (at least on the copy I watched) she was not credited for either. So maybe she either lost her momentum and had to take lesser jobs, or was taking it easy for a while due to her health, and doing short bits that weren't too taxing. That seems plausible to me anyhow.
Top

Re: Deducing the mannequin models in "The Trevi Collection"

Meanwhile, I suspect that the model in peach is actually a male stuntman in drag, based on facial structure, and from a shot of them from the back where they appear to be more muscular than the other performers.

Re: Deducing the mannequin models in "The Trevi Collection"

Its a shame they do not list the models who posed as mannequins in the credits. They certainly had a good role in the movie.
Top
Post Reply
3 posts • Page 1 of 1