Hi,
I have seen some old clips being remastered using software like Topaz Enhance AI

Would be interesting if we can upscale some of the vintage timestop videos to 1080p or 4K !

I messed around with it a little on a free trial, it doesn't give great results if the quality isn't that great to begin with, like older VHS recordings.

Gigapixel AI, the photo enhancer works much better, so I went ahead and got it. It has the same limitation, but even early small digital photos or photo scans have enough detail to enlarge well. Magazine scans or video stills, not so much.
aurobasilisk.deviantart.com
Top

Any examples so far?
Top

Well, post a jpg you'd like to see upscaled, probably the best way to do it.
aurobasilisk.deviantart.com
Top

Thanks for posting about this. When I started on the gi-normous task of transferring my ASFR VHS tape accumulation over to digital about seven years ago, I was highly disappointed with the end results. I spent an entire weekend and only made it through a couple tapes. I fiddled around with the settings and (eventually) went through three different programs. When I watched an old VHS tape that dated back to the 80’s, and it actually looked clearer than the digital copy I’d just wasted a whole day on; I quickly lost interest. I went through a few false starts after that and even spoke with a guy that professionally transfers old family films & tapes locally. He said, “The problem isn’t the settings and the way you’re doing it; it’s the fact that your trying to transfer something on tape that was never meant to be digitized in the first place. And if the source was shitty quality to begin with, there’s no program in the world that’s going to make it perfect.” So for now, that 70 lb box full of tapes can remain in the back corner of the closet where it can’t harm anybody.

here's a screenshot of the same movie upscaled to 1080p :

According to author, he was using Topaz AI Enhance to convert...

Topaz is the one I have as well. It all depends on the original screenshot here's one that it had trouble with- it's usual the faces:

Still can't figure out what movie this is from.

FYI, there's someone out there trying to restore old DVD's --> https://www.extremetech.com/extreme/324 ... space-nine

Still can't figure out what movie this is from.

You're not the only one! I joined an Asian Spy / Sci-fi film collectors site back when those photos first appeared in the community. I sent them to the moderator in hopes that he might identify the film (or at least identify the male and then I could search through the entire series). Unfortunately, he didn't have a clue. He did pass on a couple of cryo related films & images I hadn't seen yet, including this poster for the 1966 ASFR classic Kiss the Girls and Make Them Die and a rare publicity photo of "Gioia" posing next to what appear to be wax or fiberglass figures of Valone and the kneeling blonde (shown frozen inside one of the cryo tubes during the big reveal in the film). 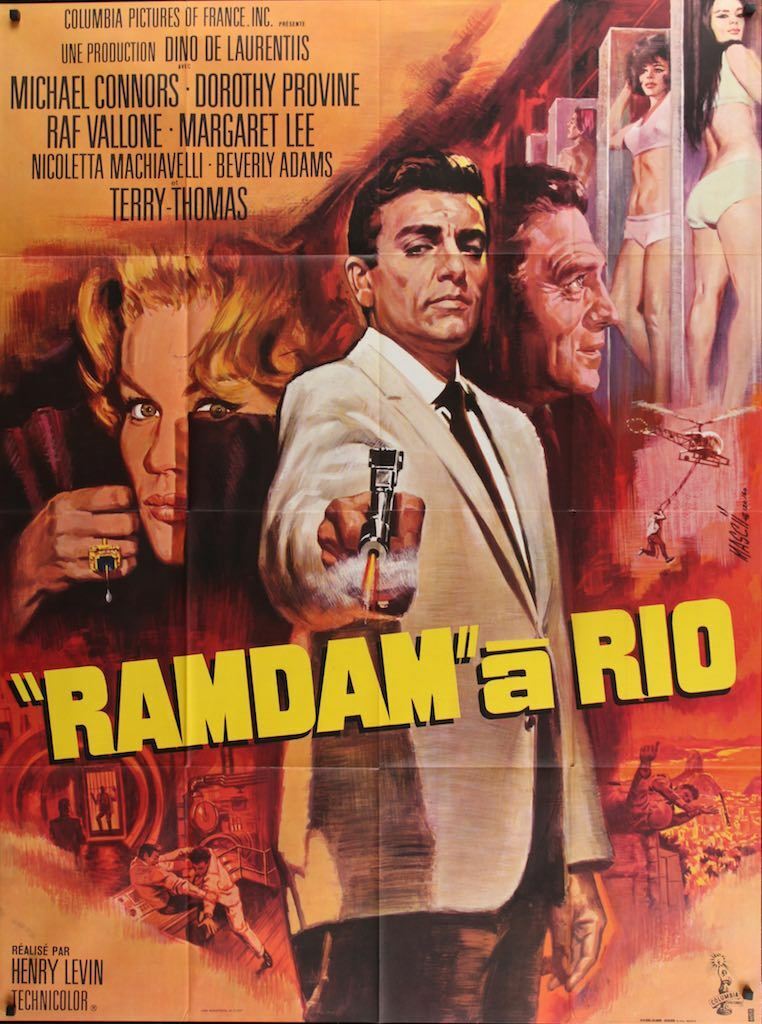 I've spent hours yet again, parsing through every 60s/70s spy, eurospy (which I've seen most of anyway) or martial arts flick database, because this jogged my memory again. So in a point-counterpoint style:

It's an interesting study, it's obviously a decently budgeted flick, the set and colors remind me of a mid to late 60s high end TV production, like 'Wild Wild West' for example. However, I am assuming it's an Asia based, and I think the male character is Japanese. Counterpoint, there's actually quite a few western girls in the scene for a purely eastern production, particularly if it's from Hong Kong. The Shaw Bros made a few pretty good spy flicks in the late 60s with this kind of quality, but this doesn't match any of them that I can find.

I lean against it being from a TV production, for one thing the aspect ratio comes out to about 2.4:1, slightly larger than even Tohoscope or Shawscope (2:35:1), and Tohoscope would be replaced by Panavision by the late 60s. I'm fairly certain it's from 70 or later, just from the quality of the picture. Counterpoint, It could be a TV movie from the later 70s artificially letterboxed, which would be the last time frame to fit the clothing style of the male protagonist. This would match up to about the 'Battle Fever J' era of Super Sentai, when the production value could be high enough, and the clothing still matching pretty good. Also that team had a whole national flavor to each character. (every pink ranger should wear the Miss America leotard and nude hose in my book) which could kind of go along with what is going on here? However I can find no reference in any episode guide, and again, probably way too many western extras for a TV production.

I'm really leaning on this being some kind of joint movie production, with pretty good production values, from around 1970-1975. Possibly Shaw Bros or at least adjacent. It's just inexplicable that something like this doesn't show up. You'd think just searching on "Miss World contestants frozen" or "beauty queens abducted" or some combo of that would get a hit, but nada.
aurobasilisk.deviantart.com
Top

I would think that the Asian guy in his distinct silver satin space suit / jacket would be identifiable, but no luck. It almost appears that the blonde posed in front could also be main character. I'll PM the website and reply that the moderator sent me...
"Your beauty will be preserved forever, my dear!"
Top

Funny that you say that, that what I've been doing, searching for the guy in the outfit in thousands of stills, using every combination of search terms I can think of. That and national costumes which are very reminiscent of the old Miss World pageants.
aurobasilisk.deviantart.com
Top

So like a bolt from the blue, I saw a repost of one of those ice block caps, and user ASFRian posted the name of the film in the comments! It's called Konto 55: The Great Outer Space Adventure (コント55号 宇宙大冒険 Konto Gojūgogō Uchū Daibōken).

It's a wacky comedy with a sci0fi theme, with a Bluebeard type space villain. There are a few movies with this duo, so this is their Abbott and Costello Go To Mars, I suppose.

Unfortunately, it is not available outside of Japan. It is streaming on both Amazon.jp and Youtube with a Japanese VPN, but they will not take western payment. I'll figure it out somehow.

Good detective work. After searching online for the last decade, I'd pretty much given up on that one!